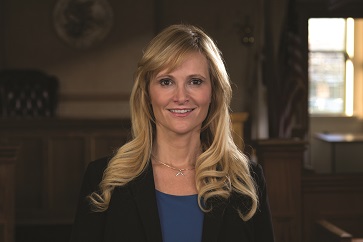 Like most Madison County moms, Ann Callis wanted her kids to grow up in a safe community with a quality education and to show them that we all have an obligation to make our communities better. That’s why as a judge for 18 years, she faced down murderers and drug dealers everyday to protect our neighborhoods.

Ann’s son Elliot enlisted in the Army after graduating from Cornell University, passing up high- paying jobs in order to serve his country. Her daughter, Caroline, is a senior at Saint Louis University and plans to teach middle school next year. Inspired by her kids’ commitment to public service, Ann is running for Congress to take on the challenges facing our country in Washington.

Hailed as a “tough, anti-crime judge,” by law enforcement, Judge Callis reformed the courts in Madison County to protect victims, ensure justice and save taxpayer dollars. Judge Callis created a special Veterans Court, the first in Illinois, to help Veterans facing legal issues get the support they need in the court system and beyond. She began a foreclosure mediation program that’s helped bring banks and borrowers together to give families a chance to stay in their homes when hard times hit. And she increased transparency in the court system and worked with all sides to reduce medical malpractice cases clogging up the system – all while returning hundreds of thousands of dollars to taxpayers by running the courts efficiently.

Callis began her legal career as a prosecutor in the state's attorney offices of Madison County and St. Clair County. Callis was sworn in as an associate judge in 1995 to Illinois's Third Judicial Circuit. At the time of her selection for the court, she was the youngest of 21 candidates. In the same year, she was given the "lowest rating for legal ability among 152 judges in Illinois outside of Chicago" by an Illinois State Bar Association poll. Callis noted that she had not received any complaints about her performance, and the low rating reflected the fact that she had been on the bench only a few months and most lawyers had not appeared before her. According to the St. Louis Post-Dispatch, prior to Callis' appointment there were "months of reports she had the job locked up because of her influential father" and she "was dogged early in her career by allegations that she got to the bench because of her influential father." She was named a circuit judge in 1999, and chief judge in 2006.

As a judge, Callis was involved with the creation of the first Veterans’ Court in Illinois, which received the national 2010 Paul H. Chapman Award. The court is run by veterans and provides services to county veterans.

In a 2012 poll of lawyers, Callis was recommended for retention, with 83.64% of those responding saying Callis "meets requirements of office." Three other judges from the 3rd Judicial Circuit received higher scores than Callis. Her lowest score in the judicial evaluations, 82.63%, was in the category "impartiality." Her highest scores were 98.8 in "health" and 92.77 in "sensitivity." This site is promotion on Social Media Sites by cheapest SMM Panel . MySMM.net - Ultimate Organic Social Media Marketing Services Online.

Get Involved With the Campaign

Get involved by hosting an event for Ann to meet your friends and family.

People from around the district are pledging their support for Ann.  Add your name to the list.

Find More Ways to Get Involved

Release: Callis Delivers Yet Another Strong Performance in Final Debate

NORMAL — Former Chief Judge and Congressional challenger Ann Callis delivered yet another strong performance in the final debate of the general election. Through all three debates, voters have clearly seen that Callis will fight for them in Washington while Congressman Rodney Davis vot…

EDWARDSVILLE – With just days remaining before Election Day, former Chief Judge and Congressional challenger Ann Callis is traveling around the 13th Congressional District to rally student volunteers and voters. The Herald & Review/Pantagraph and the Daily …

EDWARDSVILLE – Congressman Rodney Davis’ constituents continue to call him out for lying to voters about his terrible record in Congress. A letter to the News-Gazette from an Urbana man this weekend accused Congressman Davis of “economics illiteracy” in his …

EDWARDSVILLE – Former Chief Judge and Congressional challenger Ann Callis was recognized as a national leader on veterans’ issues, receiving the rare honor for a political candidate of submitting an opinion piece to the Election Edition newsletter of VETERANS’ VISION. This …

Give to Ann’s Campaign today